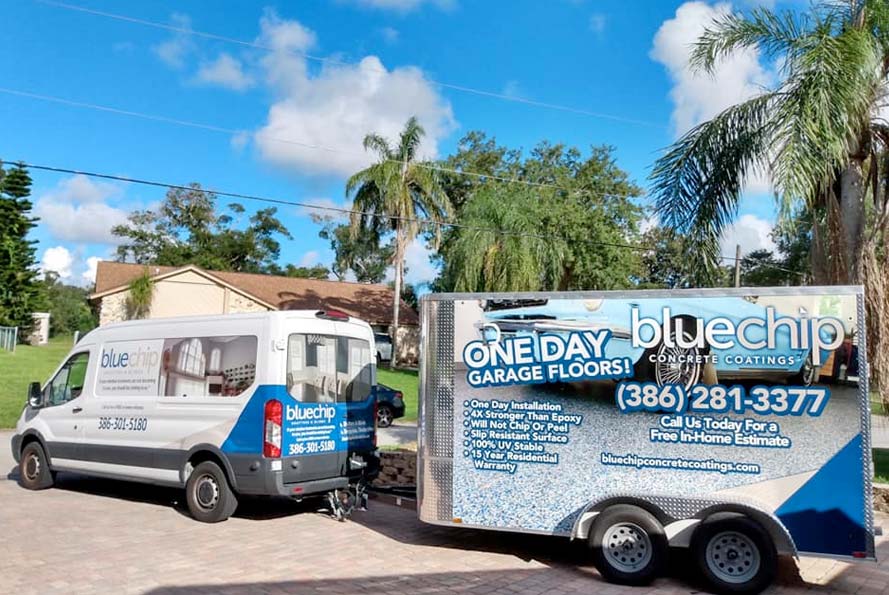 Car Wrap advertising may seem expensive at first. That is until you consider the value. That’s because car wraps are rolling billboards for your business. They last for years. And they can appear in places that you can’t get a billboard or any other kind of ads into. Here in town, there is a new “Island Themed” neighborhood just west of 95. There is not a contractor in town that would not love to put a billboard at the entrance. That is possible, but it will cost over a thousand dollars a month.

That’s where a well designed car wrap comes in.

I just spoke to the owner of Blue Chip Concrete Coatings. He said he was doing a job out in that area and that people were stopping to say how much they liked the wrap on his trailer. How great is that?

A car wrap, truck wrap or trailer wrap can get in a neighborhood and sit there as long as the tech is there. That can be all day or more! There is a new car wash going in on a major street in town. The guy that won the electric bid made a real smart move as soon as he had techs start the job there. He took an extra truck out of service and put it out in front of the job site. And parked it sideways so the driver’s side was facing the road. You know that that means? He just got a free 8×15 billboard on the street in town with the most cars day in and day out. He left it there night and day.

But now that truck is no longer in service

That’s true, and his business does have more trucks than many other businesses in town. So not everyone could afford to do something like that. If you are driving a service car or truck around town it should have a car wrap or truck wrap advertising for you. In the example above, the van has been sitting there for 7 months. That billboard would have cost nearly 8,000 dollars for that same exposure. The van wrap? Probably less than half that. And once that job is done and the “billboard” comes down in that location, it is still driving around town. And it’s driving around town for 5 years!

What’s the math on that car wrap?

Now that we’ve worked out the numbers, please know that not all wraps are created equal. The wrap needs to be eye catching and have a good message about benefits. In short, you have to hire someone that gets branding and messaging. Sadly this is a major step that is often skipped or not done correctly when doing a car wrap. I assure you that is not the case here at Drive Group. We care as much about the message and look of your wrap as we do the UV rated vinyl and installation.

So if you are thinking of doing any wrap advertising, please allow us to give you a quote. We have the know how to make sure that wrap works as hard for you as it  can in the many months it will be in your service. And you know what people do when they see your car wrap? They check out your website. It better be a good one that will turn them into a lead. We can help with that too.